Apparently Christmas Day isn’t much celebrated in Portugal, with Christmas Eve being the main event. Certainly on the boat it was a day like any other except there was more alcohol with lunch. Nonetheless I had a little Christmas morning for myself. The ridiculousness of it cheered me up. I felt like I was in a Mr Bean sketch and if there had been a tree outside my porthole, I may have made Twiglets by dipping the branches in Marmite.

Vik, Tim and Kezzie gave me a Christmas present before I left home, and so I set that out along with my Christmas decoration which I made of shredded Twix wrapper stuck to parcel tape. My last two chocolates, saved for this event completed my festivities; a mini Twix and a mini Mars, small plastic-wrapped bundles of sugary euphoria. I put on the radio hoping for some Christmas cheer but got little from the World Service. Anyway, scene set, I opened my present. I teased open the wrapping to reveal a mini snow globe and with it Vik had written a note of poems and quotes. I loved it. I ate my chocolates with relish, humming A Fairy Tale of New York. 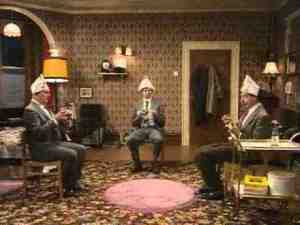 We had steak and chips for dinner, so although it wasn’t very festive, It was lovely to not have fish for a change. It’s been about a month without any meat except pig trotters and tripe.

I rang home at about 1230 GMT and was hoping to speak to Abby and the boys to see what presents they had for Christmas. Then I was going to get Vik’s number and ring her. I thought Karen would most likely be at Mum & Dad’s. I had it all planned. The engaged tone rang down the line and I was disappointed but thought I’d ring again later. I know how busy the phone gets at that time on Christmas day.

I’ve been waiting all evening on the bridge for the radio to be free so that I could make the call. Everybody has been making calls today so it’s been almost non-stop on the radio. At 1045pm GMT  it was finally my turn again, and I thought I’d definitely be able to get through this time. It was engaged again. I’d managed to stay cheerful all day until now, but I’m so disappointing not to be able to call home. Miguel must have seen how disappointed I looked when I got the engaged tone a second time; he went to his cabin and came back with a big bar of chocolate for me. Such a kind gesture.

10 minutes later. I feel better now, I was gutted about the phone call but now I’m okay again. I just went and had a cup of tea and some peanuts. Is there anything that can’t be cured with a nice cup of tea? I’ve got terrible wind and I’m farting like a steer. Must be all that Bean.

Days Until Dry LandFebruary 8th, 2018
The big day is here.