I feel like I’m doing my job properly now and my figures are good accurate estimates of the catch. I am beginning to understand what a tonne of fish looks like, and how to get good estimates for bycatch and discard. I spend more time in the factory as it helps the time pass and the crew seem grateful for an extra pair of hands.

I found a mermaid’s purse among the bycatch today and cut it open. I was half expecting it to be an empty egg case with nothing but sea water inside but I was surprised to find that it was fertile and there was a baby shark (probably dogfish) developing on the yolk sack. It was still alive and wriggled a bit in my hand! I felt bad for having opened it up then, but I doubt it would have survived if it were thrown back.

I had a good day today for two reasons. Firstly and foremost I was excited to find out that another ship, the Santa Christina, is leaving from Aveiro in Portugal before Christmas, and will bring supplies out to us. That means there is an opportunity for Mum and Dad to send me a package. I’m going to phone them tomorrow and ask for as much chocolate and tea bags as possible and a Portuguese dictionary. The other reason today was good is because I copied a Bob Dylan CD from Miguel. I can’t believe I have lived this long without owning any Bob Dylan before. I’m listening to “Mr Tambourine Man” as I type this. 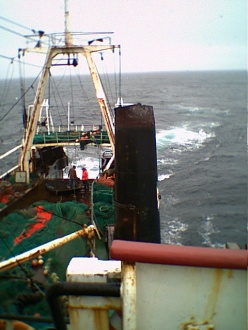 I took some photos with the digital camera which came free with my laptop the other day, some have turned out okay so I’ve started an album and eventually I’ll put them on photo CD. I might put some in this journal. It’s amazing to think I don’t have to wait until I get home to have them developed. I’m running out of film for my other camera, I wish I had brought more film and a decent camera with me!

So generally my spirits are high. The time isn’t dragging too much and I quite enjoy the space to think about things. I’m not going to decide how many trips to do until I get home but I think I’ll do at least one more and possibly more. I’d like to do a summer trip as that is the best time of year to see icebergs, lots of whales and the weather is better.
I wish I had time to fill in the PGCE application form before I left but maybe its fate, I’ll fill it in when I get back and if it doesn’t work out then my decision will be made. To teach or not to teach? That is the question. I’m still intending to travel and saving at this rate will easily be able to do so.

I watched a video today that got sent across during a transfer from the Solsticio yesterday. It was three hours long and was filmed from the Santa Maria a couple of years back. It would be enough to bore most people into an early grave but it was quite interesting to get some idea of what I might expect of the winter. It showed the ships all covered with thick ice.