We re-entered the NRA (NAFO Regulatory Area) today and so I took part in the radio show again…well I tried to, but the signal was really weak and I could hardly make out Sam’s voice. The signal to Reykjavik Radio was quite strong though, and so I attempted to call home again. 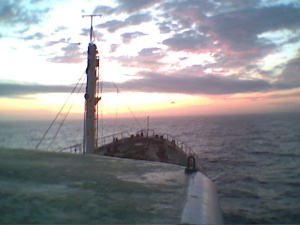 Initially I went through the same frustrating procedure as yesterday, but instead of hearing the engaged tone, the line crackled to life with Mum’s voice. She wasn’t expecting to hear from me for months yet, and so it took some explaining that yes I was fine, yes I was at sea, and yes I could call home occasionally.

I had to quickly explain a few things to her before we could chat. Firstly I needed to explain that we had to talk one at a time, as I wouldn’t be able to hear her while I had the transmit button on the radio pressed to talk. Secondly I had to explain that our call was far from private, not only could anybody on the bridge hear it, but everybody with an HF radio in the North Atlantic could too, and thirdly that I couldn’t talk about the fishing or the vessel’s location, although since we haven’t even started fishing yet, there is nothing to say about that. In hindsight I should have suggested we say ‘over’ when we had finished speaking, but that felt too formal and stilted, though it would have saved a lot of confusion.

I spoke to Dad afterwards, and explained the procedure to him too. It was great to chat to Mum and Dad and to know that everyone back home is fine. It was so surreal though to hear the normal sounds of home in this place which is so far away in every sense. As we were chatting I was looking at a ship’s bridge and beyond an angry grey sea, and yet I could picture the scene at home and it was nothing at all like this!

I’m going to finish here as it’s getting quite rough and taking all my effort to sit still in the seat and type. It’s the first day of fishing tomorrow, I haven’t as much as seen a fish yet other than those served to me on a plate! I have a big grin since the phone call!

Thanks for reading my diaries, and for your great feedback so far. It has really spurred me on to write and I’ve loved sharing these old entries with you. Because I wrote this diary for my own benefit I didn’t really explain things which I took for granted at the time. For example, I didn’t write in any detail about the role of an observer, about NAFO and how the fishery was managed, or the historical context of fishing on the Grand Banks. Therefore I thought it would be worth including 2017 perspectives every now and again, where I can explain things with the benefit of hindsight, or better still answer your questions. Feel free to ask questions either by leaving a comment on the diary, replying to the email if you have subscribed, or on my Facebook page. I’d love to hear from you!